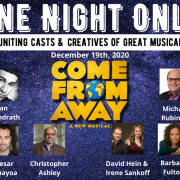 The Olivier Awards 2019: Who I Want To Win and Who Will Win