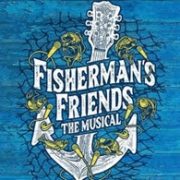 More Sea Shanties than you can shake a stick at in World Premiere of FISHERMAN'S FRIENDS: THE MUSICAL