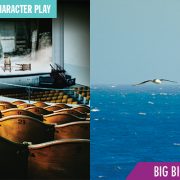 Subscribe
Rafe Spall joins the cast of “Hedda Gabler” alongside Kyle Soller... Previews begin in the Lyttelton for The Red Barn on 6 October, Amadeus starts...