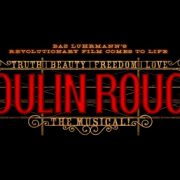 Cast announced for the Spectacular Spectacular! MOULIN ROUGE! THE MUSICAL