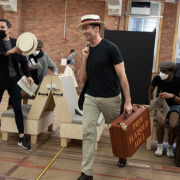 Myles Frost has become youngest performer to win ‘Best Actor in a musical’...