Royal Court Theatre announces cast for The End of History…, written by Jack Thorne and Directed by John Tiffany 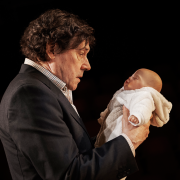