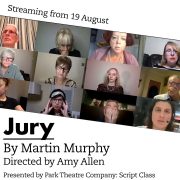 Subscribe
Alastair Knights talks about My Fair Lady 60th Anniversary concert, his next...