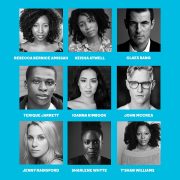 The Almeida Theatre announces the full cast for the UK Premiere of Jeremy O. Harris’ play “Daddy” A Melodrama