Goggles - a quirky comedy about love, loss, loneliness and fish presented by ThisEgg 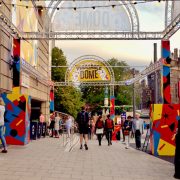 First casting announced for the Royal Shakespeare Company’s production of...