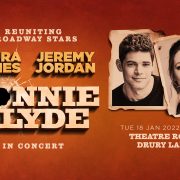 Bonnie and Clyde in concert

Subscribe
MRS. DOUBTFIRE to End Broadway Run at the Stephen Sondheim Theatre on May 29,...