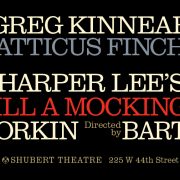 "To Kill a Mockingbird" to move to the Belasco Theatre