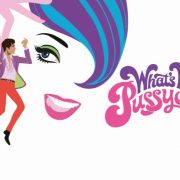 Casting announced for the world premier of What's New Pussycat? at Birmingham Rep

Subscribe
“To Kill a Mockingbird” to move to the Belasco Theatre