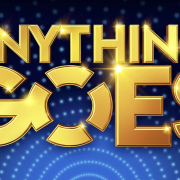 Anything Goes coming to UK cinemas -for two nights only, 28 November and 1 December 2021