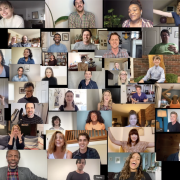 Videos & Photos released from "Take Me To The World: a virtual concert celebrating Sondheim's 90th birthday" On Broadway.Com & Youtube

Subscribe
Full Cast announced for the UK première of Martin Sherman’s Gently Down The...