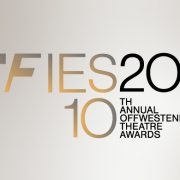 Subscribe
MEAN GIRLS Has Concluded Its Record-Setting Run on Broadway