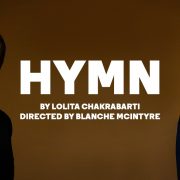 Subscribe
Shoshana Bean will return to Broadway in WAITRESS

Casting announced for Nicholas Hytner’s immersive production of A Midsummer...