Interview, Amy Shindler: "I have three strands to my career: I’m a writer, actress and voiceover artist. Okay, I’m clearly a wheeler-dealer." 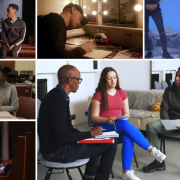 Interview with Playwright James Graham: "I’m a human who doesn't like or know how to talk about himself."