Sink The Pink and the Pleasance present: Escape From Planet Trash 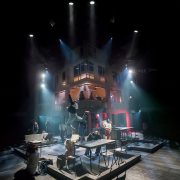