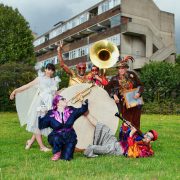 Subscribe
Let’s reflect on the responses to my Open Letter

Chickenshed’s Lou Stein: ‘There is a world of actors who are not...